Mother had cause for her lack of enthusiasm about war, having lost her first husband while he was stationed with the Army Air Corp in Sardinia, attached to a bomber squadron of B-26s. They had married in the fall of 1943 at Barksdale AFB in Shreveport, Louisiana; he shipped out a month later and died the first of March 1944. The wedding was in the chapel on the substantial and well-maintained grounds of the old base. Unlike the jerrybuilt affairs of plywood and raw two-by-fours hammered together after Pearl Harbor, Barksdale had been a training base since the 1920s. Its core was more like a film studio of the silent era, white thick walled buildings in a refined Spanish style with window awnings, old trees pushing up the sidewalks, and shrubs heavily blossoming in the southern air. Mother was 24, the groom, a doctor’s son named Kenny whom she’d known since high school in Lincoln, a couple of years younger, slim, a little gangly, tone deaf, good humored and sweet, training to be a bombardier, lying prone in the Plexiglas nose of the two-engine medium bomber nicknamed the Marauder and manufactured by the Glenn L. Martin Bomber plant in Omaha, Nebraska.

They lived together as a married couple for about 6 weeks, through Thanksgiving and Christmas. Even in their own eyes they were young; when a December ice storm knocked out the power in the apartment house, they consoled themselves that at least they could still have a Christmas tree until remembering that those nostalgic mazdas of their childhood would also need electricity to cast their glow. Then on New Year’s Day Kenny shipped out as a member of the 335th Bombardment Group Medium, insigne in its heraldic descriptors a shield “Azure, from a fess nebuly a demi lion rampant issuant or,” motto FIDUS ET FORTIS, faithful and brave, and mother packed and went home to Lincoln to her old bedroom in the house at 2626 P, up the entryway stairs, the dark stained railings and oblong newel finial, past the black and white tiled bathroom on the left and then one door down on the right beside the more capacious front bedroom facing the street in which a roomer resided, an ancient, fussy man who wrapped a towel around the cracked old suitcase he carried downtown to the board of trade everyday to keep his white pants from being soiled, trodding sourly down the homefront stairs jealous of his renter’s slim prerogatives. 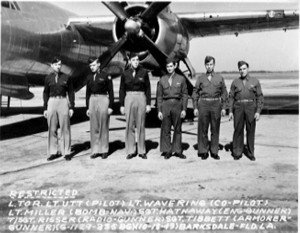