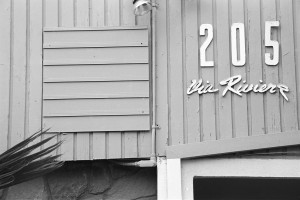 Tuesday nights in Redondo Mother goes out to eat at the Brewery, a nice two-story bar-bistro in the Riviera Village, only a block from our old apartment – in fact, from the second floor, one can just see the black roofline of the apartment building itself among the jumbled gloom at the bottom of the large money-making rectangle of sunset and palm trees visible from the restaurant balcony. Her across-the-street neighbors Fred and Dee have been taking her there for years, and now they follow a fond and well-articulated routine into which I’m invited when I’m in town – the brisk walk down the hill to the village, the chattering conversation under the rushing sounds of home-going commuter traffic and the streetlights coming on in the overcast. At the restaurant, Fred regales me with his recent garage sale finds, AR two-way speakers in mid-60s walnut enclosures, an Altec Lansing preamp, and Dynaco woofers that heft like exercise gear, treasures over which a shockingly small amount of money has changed hands. I always find this subject soothing: here are my idyllic 1950s moments spent with my beloved Uncle Bob, maker of Heathkits and installer of an endlessly fascinating Gerrard turntable on its pull-out base in the cabinet above his records, Big Tiny Little, Andre Kostelanetz, and Jackie Gleason’s “Martinis and Memories.” He and his wife Nancy, Father’s sister – chic, indulgent and childless – lived up the hill from here in the Hollywood Riviera with a view of the basin. Both are gone now, but the fogs of the village and the palms and the cars winding down the French-curved post-war suburban streets and the sighing ocean to the barely reddened west are the same while Fred’s litany of mid-century hi-fi, of Fisher and McIntosh, of the quest for the Spartan circuit, the straight wire with gain, the supreme fidelity of the linear, have all dropped me into some quietly helpful dream.