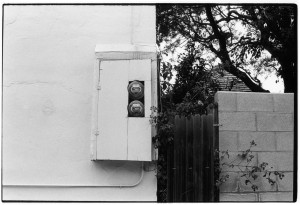 In my mid-twenties, still living in Redondo, I met my wife and imagine my odd pleasure as I visit her home for the first time to find that she lives in an apartment in the village. A comforting familiarity lifts me along the narrow stairs of faux-marble cast concrete rising through the dark stuccoed tunnel that leads to her upstairs unit. I’ve dropped by to visit her and meet her parents, we’re all very young, and going through the hollow-core door with the letter D screwed into its veneer and then standing on the green figured carpet it’s utterly clear that in this neat and inviting space, despite the bright matching dinette and chairs, sofa, easy chair, American colonial end tables and TV enclosure, no one has a cent to their name.
Down the hall will be the bath, the small back bedrooms with aluminum-framed windows looking two stories down onto the parking slots. On the right of the living room there’s the patio slider, the narrow balcony of California living overlooking the walkway between the apartments; back inside not only the beautiful young woman at the door but my future mother-in-law as well, smiling sweetly and putting on a bit of show at the dinette table with a grapefruit juice and vodka on the rocks in a big globed cocktail glass and a Benson and Hedges long held gracefully aloft under the swag lamp, her hair in a neat silvered bubble, Clairol “Winter Wheat.”