Thanks to Sarah Pape and the folks at 1078 Gallery in Chico for inviting me to participate in their summer reading series last week. It was great fun and a real pleasure to hear such fine writers. This post and the two to follow are an expanded version of my selection for the evening.

Father and I were both hungry, so he weighed our potatoes. This was his joke; if there were two spuds left in the serving dish and each of us wanted one, he would mutter “Let’s see…” and heft them in his hand to see which was bigger, the one he would keep for himself. Then, joke over, it wouldn’t really matter which potato went where, but the point had been made. Although this aggressive teasing ran counter to Father’s southern habits of hospitality, there was still a strong sense of dearth in his make up. At work he would often put off lunch until late in the afternoon, and then only eat a piece of pie in the quiet basement coffee shop of the department store. At home Mother would scold him over this; but the withholding of food, the working through his hunger pangs and then the sweet solitude of his pie and the sympathetic, motherly waitress in the wood-paneled and carpeted quiet of the coffee shop, as well perhaps as the grilling on coming home, was clearly, in his emotional economy, somehow worth it.

He hid sweets around the house, and I believe enjoyed the secret, horde-like feeling of this indulgence. Here I might also be his rival at the cookie jar, but other caches across the small arctic domain of our home were strictly verboten, like his sacks of Butterfinger and Baby Ruth miniatures, Hershey kisses, Jordan almonds, chocolate covered raisins or See’s bridge mix in the den cabinet just within reach of his recliner. If you were present when he felt the call of these rarities, he would offer one in a dry, slightly ironic sketch of gracious hospitality that was as much warning as invitation. He had been, after all a child of the depression; however, I came to feel that more than memories of the boarding house reach necessary to a middle child in a family of nine had led him to this permanent rationing system; for Father there would never be enough of what food had come to mean. For her part, Mother seemed to have conquered whatever oral cravings she might ever have been subject to as she neatly picked at her smaller, luncheon sized plate while Father and I ranged in desperation over our full-grown table settings. Not having much to say to each other in the usual way, we kept up a long, tense conversation in the gestures of food.

The Benefits of Liver Soup

Father came from a strong culinary background. His family knew food, and employed good cooks both black and white so that a variety of traditional southwestern Virginia and Blue Ridge cookery filled his childhood. At eighteen he took on the management of a hotel coffee shop – the Hotel Jean Lafitte, I learned to say early on – in Galveston, Texas in 1937, working there with his brothers, all of whom had been brought out to Texas by the owner of a local Virginia resort, (once on Snidow land, it was always pointed out) who recruited local boys and sent them west to work. Whatever else this period had come to mean to father – and it surely had meant many things, leaving home to seek work, no thought of college like his sisters, rooming with his two older brothers in a notorious machine-run city that provided ocean breezes, liquor, gambling and dirty weekends to south-east Texas and the gulf from New Orleans to Brownsville – in terms of food this period had supplied Father with technique and expertise. He knew how kitchens worked and what was in dishes by taste. He learned to make salad dressings, cut sandwiches on the diagonal, take off crusts, garnish plates, and even make Baked Alaska.

The Special Features of Vita Craft

Later, after he was married, he stayed in the food business selling Vita-Craft aluminum cookware around southern Virginia and West Virginia with his older brother: Father got referrals and often with Mother in tow took his demonstration kit into apartments and houses in coal towns and river towns from Bluefield to Charleston with one street on one bank and the other across the water beyond the crouching bridges of open steelwork, the hills on either side rising blue black and steep while the L&N cars shunted past in a violet twilight. The lives of these returning vets were an education for the young couple. While Father busied himself in the kitchen, Mother sat primly in the living rooms making small talk with the wives of the up and coming young mine workers and middle managers who lit their Old Golds with matches struck on the roughened pudendum of a hand-painted ceramic Nudie Cutie brought home in a sea bag from Manila and given place of honor on the installment plan coffee table while Merle Travis’ “So Round, So Firm, So Fully Packed” hummed over the radio. Other clients simply spoke of the bottomless history of the rural mountains. “You go in there, buddy, you’ll get yer head bashed in,” an angelic towhead of eight or so allowed to Father one time as he passed her on a footbridge over a creek to his next appointment; turning, he regrouped in his black Buick, reviewed his contact list, and moved on to his next appointment to cook a less troubled family a nutritious meal from the miracle pots and pans that sealed in juices and flavor with its revolutionary waterless cooking system. He’d met Mother while he was in the service, the year after the war ended, on a train to Kansas City. Now the newlyweds ranged over the sales territory seeing the country and having a good time. “I want to see you all in ten years, see if you all are still laughing as much,” their West Virginia landlady told them, and probably Father was pretty content for the time being, making a bit of a living driving the back roads and cooking up floured pork chops, new potatoes and cauliflower with cheddar cheese sauce for young folks much like himself, just back from the war. 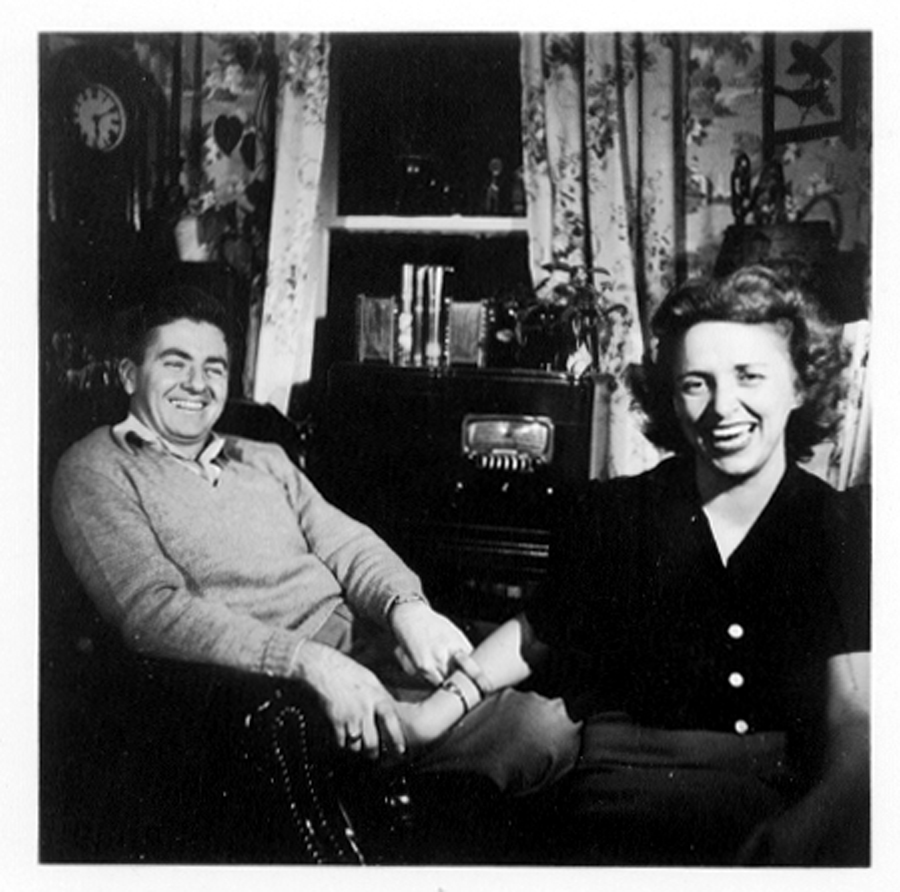